SHERYL HAS SOME issues with smells and noise. We think it might be part of an allergy problem, or perhaps something misfiring. She went to a naturalist nutritionist and chiropractor the other day to get some opinions and have some tests done.

She can't stand the smell of perfume, or cigars. Some strong cooking smells make her queasy. Then there are noises, specifically, The Glomp.

Sheryl suffers from a condition known as mandibleculitis, or the aversion to loud chewing noises (Misophonia, for real). Apparently I make these noises when eating cereal, chips, nuts, anything crunchy. She can in the bedroom and she'll hear me from the living room glomping, and she'll ask me to stop. 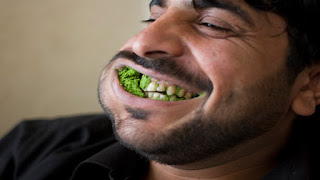 Well, "ask" might be putting it mildly. I could point out that the dumb movie I'm watching featuring Ah-nold blowing up bad guys is twice as loud as my chewing. But it's the chewing that carries through the room and gets inside her head. Since she can't eat any of these foods I am chewing, she has many negative feedback skillz to combat her addiction to these foods.

So I'm working hard on avoiding The Glomp. We were at the grocery store the other day and I passed on crunchy chips and nuts. But I did break down and buy cheese puffs. Hey, The Masters was on and I had to drown out the sound of the announcers feeling sorry for Jordan Spieth.

Now that it's getting nicer, I'm glomping my cereal on the porch. I'm trying to wait until Sheryl is asleep before demolishing a bag of chips. I'm just trying to be more all around considerate.

The Glomp. It's a terrible thing. Maybe I'll just smoke a stogie instead, outside.