Jamming at The Club

I WAS RIDING my bike last night and ran into Jon Barnard, AKA Johnny B, slide guitar player of doom.

"Heading to The Club tonight for the blues jam," he said. "You should come."

I've tried to get over to The Club on Sunday nights. By that time I'm usually comatose from either watching too much golf or from running numerous errands. I'm not very good at being spontaneous, but last night I figured, what the heck?

Sheryl and I got the garden ready yesterday, so I could either lay around and feel my back protest, or actually do something. Sheryl encouraged me to go. "Endorphins kick in when you play. You'll feel better," she said. Of course she is right. 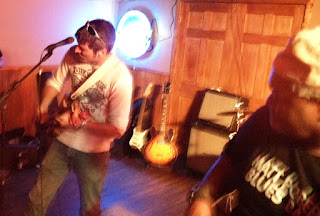 So I went to The Club. The Matt Roberts Blues Band is the house band on Sunday nights, and the first set was amazing. There was a big crowd and they were really into it. There is nothing fancy about The Club, and that's one of the best parts. It has one long room with the bar at one end and the musicians on the other. There's no stage, just the boys in the back, jamming away.

Johnny B played a few songs in the first set with the band, which features Matt Roberts, Mike Carter, Shawn Buckner and Pete Magliocco. Matt invited me to kick off the second set, and that's when it really heated up.

We got ready to start and I looked to my right, and lo and behold, Cheeks McGee was standing there with a trumpet. That's the best part about a jam night - you never know who will turn up and who will be playing at any one time.

There was a man and woman from out of town who got up and smoked through a bunch of songs, and Toussaint Smith was entertaining, as always. We capped the night with another raucous jam and it was more fun than you should be allowed to have.

Matt Roberts is an incredible guitar player and singer. Big Mike on bass and Shawn on drums are right there and Pete adds to the vibe with his hooting on the trombone.

Playing with those guys is a joy because it's all about spacing and dynamics. Blues lends itself to expression and soul, not just a bunch of noise and hammering out solos.

What a blast. I'll be back. Meanwhile, we get ready for Saturday night's District Street Concert during Dogwood Festival at Fifth and Maine featuring, of all things, The Matt Roberts Blues Band. Matt and the guys will play their hearts out - just like a Sunday night jam at The Club.
Posted by Rodney Hart at 10:10 AM