THE QUINCY CITY Council is about to consider a request by the owner of the Quincy Mall for sales tax money. The mall owners wants to refurbish the space formerly occupied by JC Penney.

This is NOT a sales tax increase. Good lord, please don't let me read anymore insipid comments on Facebook posts. I don't need the blood pressure to shoot up that high.

Here's the Herald-Whig take on it. The mall owner is doing more than $4 million in renovations. Cullinan Properties wants 75 percent of the 1 percent non-home rules sales tax generated by retailers in space it leases, instead of 50 percent in select space if an amended mall redevelopment agreement is approved by the City Council.

If the Peoria-based owner finds its Target or whatever it wants to put in there, they'd get more than $400,000 a year, the paper reported.

I have mixed feelings about this. On the one hand, the mall employs a lot of people and generates a lot of sales tax money. The owners are putting a lot of money into fixing up the space.

There are a lot of hard-working small business owners who have their shingles on Broadway. It has huge traffic. If you can afford the rent, more power to you.

On the other hand, I hate Broadway. I will brave it to get new shoes or Jimmy John's, but I don't go to the mall unless it's a Pepper Spray gig for charity or there is absolutely no other choice. I'm a downtown guy. I'm biased.

There is an overall picture here and I'm just not sure I want to see it, at least not from the corner of Fifth and Maine.

There are downtown programs to help small businesses - Sheryl and I attended the District's facade program meeting last week and it was interesting. We got a loan from the city when we bought our building. I believe the city is behind us down here. Nothing is free - you have to match grants and pay back loans at a very low interest rate, but the programs help. 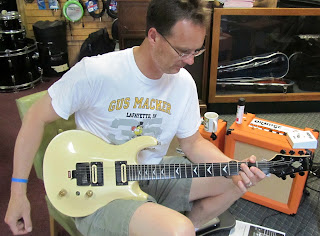 How about this - I need a big chunk of change to fix our elevator in the historic Dodd Building at Fifth and Maine. Then I need another stash of cash to renovate the third, fourth and fifth floors. And put a garden on the roof.

Can we have a percentage of the sales tax from downtown businesses? I'm saving history, providing a big chunk of change for the tax base and just generally improving life at Fifth and Maine.

Maybe I'll stick an Olive Garden or Red Lobster or Cookie Cutters With Huge Prices up on the third floor just to really get people excited. Pffffft.

The most frustrating part is that we are not a nameless and faceless corporation from three hours away which owns a big chunk of prime real estate in town. So I'm probably not qualified to get the sales tax money. Right?

Anyway, cheers to us downtown, and let me know how that whole mall deal turns out. I'm not going out there.
Posted by Rodney Hart at 12:39 PM