Stuff to keep and stuff to throw away

EVERY NOW AND then, like when there is an Apocalypse or when Angus The Young stops barking at squirrels, I clean. Last night I tackled my upstairs room, which contains a fake Christmas tree, golf clubs, a couple of old guitars and parts of three stereo systems. And that's just in one corner.

I started going through stuff on my desk and I couldn't believe how much junk had piled up in the previous century, decade or few years. Actually we've been in the house for seven years and my upstairs room has been cleaned once. So this seven-year itch to clean finally got scratched.

Then I dropped a television on my foot. I have this ancient and heavy TV that for some reason we haven't thrown away yet. I tried to lift it and I managed to get all of three or four feet toward the door when I lost my grip. 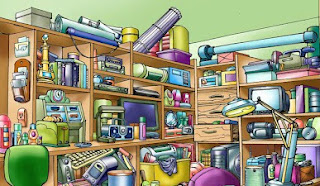 Ouch. Double ouch. If Dr. Beeper was in the room, he'd say, "Well, that might be a fractured ulna." I've been limping around like an old man ever since. Wait. I am an old man. "Neber mind," as my niece Erin Youngsma likes to say.

Ironically, Sheryl's father cleaned out his garage yesterday and brought over a bunch of stuff, including a big plastic storage bin. So I dragged it upstairs and used it to store important artifacts. In no particular order, they included ....

- Historic Second String Music guitar picks from our original location.
- Many pictures of Emily as a baby and playing basketball.
- Rare and valuable ticket stubs, like the one from a 2008 football game in DeKalb, Central Michigan at Northern Illinois. It was an adventure with Scott (Gus Macker) McNeal. Saved!
- Grocery lists from camping adventures.
- A stuffed cheeseburger pillow.
- Numerous CDs, including a 2008 Funions show recorded at The Elks. Good grief, I gotta find time to listen to that one.
- Checkbooks.
- My 1997 Masters media pass button.

Tossed were old guitar strings, golf tees, paid hospital bill receipts (I shoulda never had that $2,000 MRI on my back that showed nothing), remote controls, bandages and nail clippers. I probably should have saved the bandage for my foot, and the nail clippers.

So my upstairs room is clean again, save for the Christmas tree and golf clubs in the corner. I'll leave 'em up there, since it adds atmosphere and doesn't take away from the ambiance.