OUR FRIENDS AT Table 16 Productions, Chris and Victoria Kelley, have struck gold again. Sure, they do sensational commercials and goofy music store videos, and even award-winning feature films. 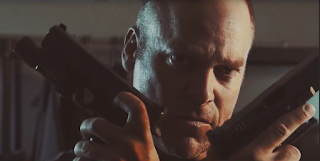 But this time, they have a film short, or short film, or just take a few minutes of your dull and dreary life to watch this .... short film. It's tremendous.

Now it's on Funny Or Die, and we'd like to see it go viral. It stars Jeff Baird, he of Washington Park patrol fame, as Gunnar Skull. He's about to face his mortal enemy. I have a feeling they will finally meet in Washington Park - that's an inside Outside People joke, by the way.

What's really cool, having both worked with the Kelleys and seen their work, is that you can tell it's a Table 16 Production. It has the look and feel of Chris behind the camera, and I can only imagine how long this short film took to make, and how many times he shot certain scenes.

Check it out - there's no violence or language. And should Le Menemy and Gunnar Skull finally meet - I'll be there to take it all in.
Posted by Rodney Hart at 10:08 AM