EARLY SATURDAY MORNING, some moron broke a large plate glass window of the restaurant at Fifth and Hampshire, Thrive. It appeared the window was punched or head-butted. The Moron bled profusely walking south on Fifth Street, then stopped by our entrance and splattered blood on our front door.

Congrats, Moron. Your DNA has been collected. You'll be caught. I'm sure we'll have to listen about your sorry upbringing and how the world is against you, and you were just mad at your significant other or just drunk and didn't know what you were doing. Whatever. All I know is that all of us downtown are keeping an eye out for you and your wrapped up hand or head or whatever, and somebody will eventually blab and give you up. 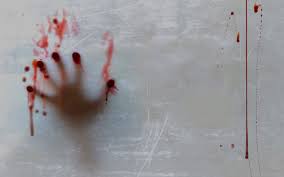 The restaurant had to deal with a busted window before a busy Saturday morning, the building owner has to replace a window, and his insurance rates probably went up. All because of a stupid and thoughtless action. I'm sure, Moron, you'll be able to pay restitution when you are caught.

Quincy Police patrol officer E.S. Cowick responded and did an excellent job gathering evidence. He tried tracking the blood trail, but unfortunately it has rained and I'm not sure there was much to follow once Moron cross the street from our building. Both he and another officer spent a lot of time Saturday on the case.

At one point I heard officer Cowick talking on his phone with another agency about a different case he was working on. Let's just put it this way - the officer shouldn't have been spending his time tracking Moron and his stupidity - there are so many more urgent and important things law enforcement really need to do.

I'm being harsh, maybe too harsh. And there are far more pressing issues in our wretched world. But I'm tired of hard-working and good people getting screwed by the stupidity of somebody else. My heart fails to bleed for you, Moron. And your blood will eventually lead to your demise.
Posted by Rodney Hart at 10:16 AM