Ticket to ride, not park

LAST WEEK A Quincy Police officer wrote tickets for cars parked more than two hours on Maine between Fifth and Sixth. A business near Sixth and Maine complained, so the officer spent the good part of her day observing cars and issuing citations.

I am guilty of parking on Maine Street during the day, mostly to suck up a spot from a WCU Building employee. WCU building employees are by far the biggest violators. There is a lot of parking within a square block, and it's not hard to find. So, Monday through Friday during the day, I will not park on Maine Street by Second String Music. I'd rather have the space open for a customer.

I watched some of the vehicles come and go yesterday. This is informal and a rough estimate, but at least 80 percent of the people who parked went into the WCU Building. Not all were employees, and a few came right back out after paying a bill or doing business.

There is one guy who comes out to his truck, sets up his laptop, smokes cigarettes and works from the truck for a couple of hours. Then he goes back into his WCU Building office. Maybe he just needs to get away from the phone or annoying co-workers. Who knows?

A while back we had some work done on our second floor and needed access beside 505 Maine. Sheryl actually went into the WCU Building to get a few employees to move their cars. Incredibly, they all had stickers for the parking garage across from the Whig on Fifth Street. "Oh, I just wanted to be closer today," one of the car owners said.

I have nothing against the WCU Building, the businesses and the people who work there. It's a big part of The District. Many employees do park a block or more away. Some even pay to park in the parking garage at the rear of the building. And really, this isn't a huge deal.

But I believe we need to keep parking spaces open for people who come down here to shop, dine or do business. We as business owners need to encourage this. I don't like QPD writing tickets - it's a waste of manpower and they have way better things to do. 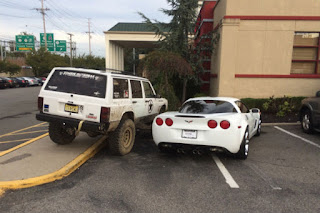 So I will park a half block west. There is no restriction on parking on the south side of Washington Park or on 5th Street. Every now and then it gets a bit congested but rarely do I have to walk more than half a block to get to Second String Music.

I have said and written this many times, but the chances of you getting closer to our SSM door than at any big box store on Broadway are way better. The difference is that my door is really small, and all of WalMart looks huge, so it appears you are parking closer. You aren't. And it's safer crossing Fifth and Maine than it is navigating through a busy parking lot.

It's about common courtesy and respect for our customers and people coming downtown. Shop, work, eat and play in The District. And let's make it easy for everybody to do it!
Posted by Rodney Hart at 10:55 AM