WE HAD A blast once again playing in Saturday's Veteran's Day Parade along Maine Street. There were a record number of entries and Pepper Spray rocked and rolled on the flatbed. We represented Six String Heroes, Vancil Performing Arts and Second String Music to salute our veterans. 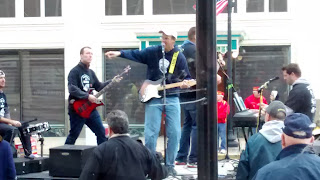 We always get a huge reaction. People like live music, even if it slides by you and you only see it for a few seconds. Of course, Sheryl says you can hear us coming up Maine from several blocks away, but that's Pepper Spray. We take pride in being loud! Not necessarily all that good, but loud.


This is a big deal for Frank Haxel and we appreciate him getting everything organized. People don't realize sometimes just how much work goes into getting the trailer, truck and marchers all together. He and Pepper Spray keyboardist Adam Yates spent a lot of time Friday night setting up the PA and plugging everything in. I helped by bringing bad stogies and drinking Frank's beverages, but that's just the kind of guy I am. 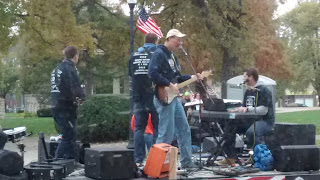 Adam, a veteran of the Marine Corps, played his heart out from the front of the trailer. Adam, Tim Smith, Justin Sievert, Adam Duesterhaus and I don't get together all that much so it's way cool when we do whamma lamma jamma.

The man in charge of the parade, Dick McKinney, is retiring. I remember doing a story for The Whig many years ago about Dick rebooting the parade, and he'll be missed. Thank you, sir, for your service!

And that goes for everybody who served, all of our veterans. It was our honor and privilege to play for you again. Let's do it next year too!

** Thank YOU to Steve Rees for these great action shots of the parade performance!***
Posted by SheyFey at 10:02 AM