HERE IS A story about good people doing amazing things, and not because they were forced to do anything at all.

Sheryl decided to attend a book signing/Keto Talk near St. Louis Sunday featuring an author she really likes. It's part of her Type 1 Grit group for low carb, moderate protein blood glucose managements. She was excited about going. I planned to stay home and sleep away a Sunday afternoon. But she asked if I wanted to go to drive, and I noticed there was a lot of rain in the St. Louis area. So I agreed, especially since we got to stop at Sonic in Hannibal on the way down. The have the BEST cheddar bites in the history of fast food (according to Sheryl). I agree they are professional grade A cheddar bites.

It started raining near New London and by the time we got about a mile south of Eolia, it was coming down hard. We were going about 60 mph and I was trying to pass a truck when we hit a flooded part of the highway, and we started spinning out of control - hydroplaning, to be precise.

Most of us have been in a wreck or two. Is there any more of a helpless feeling than knowing you are completely out of control?

We spun once, twice, and veered toward the right side of the road. Miraculously we didn't hit another vehicle. We hit the shoulder, then shot across the wet grass, and plummeted down an embankment some 70 feet to the bottom of a ravine. Sheryl's glasses flew off her head and stuff spilled out of her purse.

We hit fairly hard before coming to a stop. We sat there for about 10 seconds, and there was a knock at my window - incredibly, in the pouring rain, five motorists stopped and two guys ran down the embankment to our car, just seconds after the crash.

We got out slowly, shaken. Sheryl doesn't remember being led to a car. I left my wallet and other stuff on the seat, and I was shivering from shock. But we were alive. I got put in a car and they drove off down the road.

The people who stopped were from St. Louis and just finished playing softball in Eolia and were heading to a diner a few miles south. Softball? In November? They got us to the diner and Sheryl called the authorities. The softball team ate lunch and made sure we were okay. Sheryl had coffee and I had tea, and the waitress said it was on the house.

A Missouri State Highway Patrol trooper, Trooper Neighbors, met us at the diner and said he counted two places in the grass where we spun completely around. Had it not been wet .... we'd have rolled over. The trooper called a local towing company, and the driver was already out and about in the rain, since he figured he'd be busy. 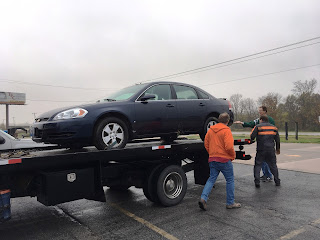 Sure enough, the trooper said there were four or five reported wrecks reported in the area due to heavy rain. The highway had just been resurfaced and was super slick, and the tow truck driver said the spot we hit wasn't draining properly.

Poor Frank Haxel. Always in the wrong place, at the wrong time. Sheryl called him and he jumped in his truck to head down, about an hour from Quincy. He stopped before getting to the diner and talked to the trooper and the tow truck driver, and told the driver to meet us at the diner.

I thought we were screwed with the car. There was no way it was driveable, no way. There was a lot of body damage, especially under the front of the car. It's covered in mud on top, both taillights are cracked, and the back bumper is all messed up.

We got it off the flatbed tow trailer, and I drove it around the parking lot, and it was fine to drive. The bill was $210. "I'd pay him $500," Sheryl said. The tow guy was awesome, and how he got our car out of there so quickly I will never know.

Unbelievable. The softball team hugged us and cheered that the car was driveable. They were as happy as we were that our wreck didn't wreck our week. They were truly happy to help and be neighborly, just like Trooper Neighbors.

We got it home, with Frank trailing behind us to make sure we were okay. Sheryl drove because I had some "confused" moments and she thought I shouldn't drive.  I got some rock and roll therapy at The Club with the Matt Roberts Blues Band last night, and didn't sleep  much when I got home. 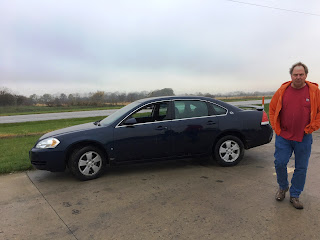 This morning we are both sore. But we are alive.

The car can be fixed. Sheryl can hopefully go to another book signing or grit meet-up in the spring. I can get behind the wheel and drive on the highway again.

And the kindness of strangers and Frank?

It's a beautiful thing, thank God.
Posted by SheyFey at 10:08 AM