EMILY IS LUCKY she wasn't seriously hurt or even dead after she hit a deer earlier this week. It was on the highway leading out of Macomb to Quincy, and she smacked it going the legal speed limit. It broke the passenger window, showered her with glass and totaled her brand new Suburu.

She was wearing her seatbelt, and she says it probably saved her life. 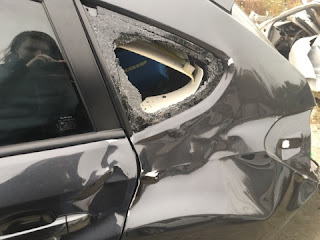 The deer crashed into her window, flipped around and broke out the rear window with its butt. Emily flagged down another driver, a sheriff's deputy and ambulance arrived, and her friend Dr. Erickson from Macomb came and got her. She was bleeding profusely from the face due to glass, so the ambulance crew cleaned her up and asked if she wanted to go to the ER.

She wisely said no. She was nicked up and very sore but otherwise OK. When she took a shower later she pulled three large pieces of glass from her ear. She was also covered in deer hair and she pulled a tick off of her body later.

The photo doesn't do the crash justice. And I could show you the one of her bleeding face - it looked like Halloween makeup - but I think you get the idea.

The deer didn't make it. Emily said somebody stopped and asked her if he could take it. "No. I'm going to have it stuffed and mounted in my living room," Emily said. Well, she didn't, but she felt like saying it.

I've hit my share of deer over the years and it's an awful thing. Many years years ago I was bombing down a Michigan back road heading to Traverse City when I smacked a huge buck in our Honda Accord. The front end was demolished and incredibly, the car still worked. We got it fixed, and a few years later in Quincy the air conditioner quit. When the mechanic went to replace it, he found it covered in deer hair.

To make matters worse, Emily is being forced to move from her downtown Macomb apartment because it's infested with cockroaches. Yup. Infested, as in, she hasn't slept in her bed for weeks because it's full of  bugs. This has been going on for at least 6 months and her landlord said she was "overreacting."

You know the movie where the father says, "Nobody puts Baby in a corner!" Yeah, well, Emily 1, Landlord 0. Be careful if you are looking for a downtown Macomb apartment.

So she's breaking her lease and moving to another place, and I'm going up Saturday to help her out.

Hopefully I don't hit a deer.
Posted by SheyFey at 9:44 AM