YESTERDAY ABOUT NOON, an excitable chap wandered into the store, looked around with a wild look in his eye, and said, “Please tell me you have a bass drum I can rent.”

This was a first for us at Second String Music, and we’ve heard them all. A bass drum?

“I need it for a rally we are having at the Oakley-Lindsay Center,” the man said.

Turns out he wanted to be the loudest vendor at the “rally.” It was for a vacuum company. He already had an air horn. And now he wanted to pound on a bass drum.

I wasn’t sure. We don’t rent out stuff like guitars and drums. But we do have a used Pearl set, the four shell pieces. So Sheryl said, “Sure!”

For one low price, he rented the bass drum and a set of mallets. He even thought about buying the four pieces until his wife came in and put his idea to rest. “Like, you really need a drum kit,” she said, with the dreaded eye roll.

It’s a bit risky to do stuff like this for people you don’t know. But he was desperate and we figured, why not? So off they went, happy as clams. 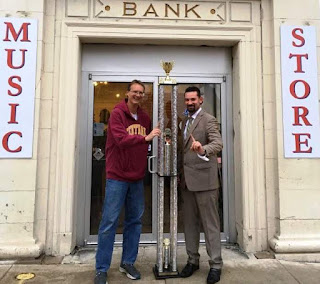 Sheryl figured the wife wouldn't want the bass drum to come back to their home so they would certainly return it to the store. Smart.

He returned at 5 p.m. with a massive smile on his face. “We won! We won!” shouted the man. He pointed to the back of his van. “You should see the trophy!”

Sheryl made him get it out and we posed for a photo. I don’t even know his name, what a rally is or why he was making noises for Kirby Vacuums.