GENERALLY SPEAKING, SHERYL doesn’t cook. We both are lower carb, she eats way fewer carbs than me. I don’t mind making steaks and vegetable meals. Sometimes it can be a challenge finding new ways to cook mushrooms and asparagus. Dessert is really hard to make, so we go our own way after dinner.

We have a Thanksgiving dinner with the Mays tomorrow and we usually just buy a couple of pies to take. This year Sheryl wanted to try to make a pumpkin pie and see if it tasted good enough to share with family. So she found a recipe and tried to make sure we had all the ingredients. (HyVee to the rescue again!) 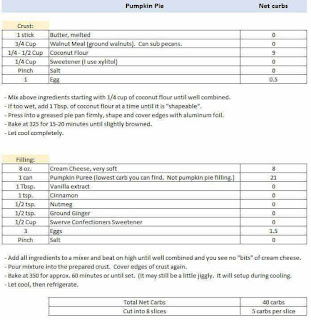 Sheryl made a test pie last night and bought extra ingredients to make one to share tomorrow. I mixed ingredients because “you have better mojo in the kitchen,” she said. Sounds like a way to keep me from watching the hockey game, but if it keeps her away from Flip or Flop Ursa on HGTV, we both win.

After grinding the walnuts, finding all the spices and putting the new ingredients around our tiny kitchen, Sheryl realized we still needed a few items from HyVee. (“What? We are out of almond flour for the cornbread?”) Sheryl popped her creation into the oven, and she also made low carb cornbread. Both turned out well and we even had pumpkin pie for breakfast this morning. It was guilt free and delicious.

Wow, who knew I’d eat low carb pumpkin pie and enjoy it? I might have to demolish a bag of Doritos to make up for it, but it’s not bad and I recommend it to anybody watching the carbs and eating better.

Can we use almond flour and walnut meal to make pizza?