I COME FROM a family of immigrants. My father arrived as a young boy in Canada from the Netherlands. His father, a pastor, had six ok looking boys and a beautiful daughter (my favorite aunt!) and wife, and spoke little English when they set up shop in Ontario. They created a new life with many other Dutch immigrants.

Imagine that. A pastor coming from a shithole country like the Netherlands, not speaking the language, having his kids suck on the Canadian governments teat. And what a wild and unruly bunch of kids they were, not at all successful later in life. They didn’t become lawyers, pastors, inventors, painters, artists, philosophers, family men.

Wait. They did. See? They overcame their shithole roots. Those whacky Dutch.... always being conquered by their neighbors, letting soldiers wear long hair, and skating everywhere on frozen dikes. They must have horrible traffic there because I’m always reading about red lights in Amsterdam. 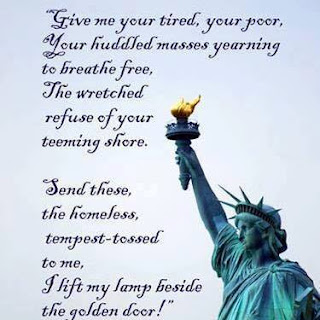 I was born in Philadelphia, PA, where my father was a seminary student. We moved a year later to Nova Scotia, then Montreal, then London, Ontario. My two brothers and sisters were born in Canada. My mother was a U.S. citizen.

In 1980, we moved to Grand Rapids, Michigan. My father got a job with the Christian Reformed Church. The church helped with the move, and my father got me Canadian citizenship before we left. My adopted brother, Greg, had to get a green card, along with my dad, but because my mother was a U.S. citizen, my other siblings were already dual citizens and didn’t need one.

When we crossed the border at Port Huron, U.S. officials stopped us and told my father we couldn’t bring in our dented and ancient Dodge Dart because it didn’t have a catalytic converter. They told him to turn around and sell it in Canada. So my dad paced around, faked a couple of calls to a congressman, and finally said, “Well, you have seven of us here and we are sleeping on the benches until you let us in.”

They let us in and warned him he’d be fined if he didn’t fix the catalytic converter. My dad eventually got a letter stating as such, but our elected officials told him to ignore it. Good thing my sister rolled the stupid car and wrecked it a few years later, right?

I think my siblings are U.S. citizens automatically because my mother was one. At least I hope so. I don’t want them deported back to that shithole country called Canada.

My father eventually became a U.S. citizen. My adopted brother Greg, who died in 2002, never did, and probably never would have, and it wouldn’t have mattered. Unless he was still alive today, in our MAGA society. Is ICE deporting illegals from Canada?

I have dual citizenship. It’s recognized by Canada, but not the U.S. It doesn’t matter, because I have a U.S. passport. When I go to Canada, I just use my passport, not my Canadian papers, because it makes things easier.

Before you jump all over me for being another liberal fake news conspirator, let’s just say you can take the boy out of Holland and West Michigan and the Christian Reformed Church, but you can’t take the Dutch and West Michigan out of the boy. I’m as conservative as they come. I voted for Reagan and Bush. I don’t like people who are lazy and live off the government and bitch and moan, but never vote.

That being said, I’m from a family of immigrants. I’m proud to say so.
Posted by SheyFey at 12:37 PM