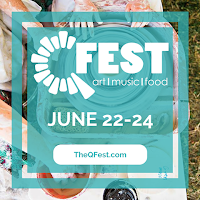 Q-FEST, ORIGINALLY known as MidSummer Arts Faire, is going back to the fourth weekend in June. This year it will be June 22-23-24 in Washington Park, and we at Second String Music could not be happier.

Last year it was at the beginning of June. Organizers changed the date, in part, because they thought the weather would be a little cooler. Turned out it was hot and humid as it normally is in Quincy in early June.

Q-Fest is also partnering with Blues In The District, and there will be another street dance party with live bands on Saturday night. Geesh. A stage right in front of our building with killer bands? I think we can live with that!

We are going to encourage the Q-Fest organizers to not close down Maine Street at 4 p.m. Friday afternoon. Last year it stopped our normally busy Friday afternoon traffic in the store. It would be a huge problem for Blues in the District that night too. Hopefully they don't close the streets on Saturday either, though it will take time to setup stages and vendors. We have high hopes.

Hooray for downtown Quincy and again, what a great event and great time of year to have it in Washington Park. It’s gonna be another rocking summer down here!
Posted by SheyFey at 11:42 AM