Timing and being swamped

TIMING IS EVERYTHING, of course. Sheryl had to run some errands yesterday morning. Big storm coming, you know. Ice, sleet, snowmaggedon, empty bread and milk shelves, all that stuff.

You know what that means. Two minutes later a guy comes in wanting guitar lessons, info about guitars, pedals, strings, etc. Then a gal comes in and buys a guitar. Then another gal comes in with a Christmas Project guitar (she bought it somewhere, and it doesn't work, and now we are fixing it). Then two more guitar students show up because they want to get their lessons in early due to the pending snowmaggedon. Sheryl gets back and immediately starts putting out fires and consoling poor Angus, who was sitting by the door waiting patiently for her to return.

All part of the deal in a small retail business. I like being busy and running around with my head cut off, actually. And we still had a good lesson. Of course Sheryl had to fix all my screwups when she got back, but she's used to it and doesn't complain too loudly. 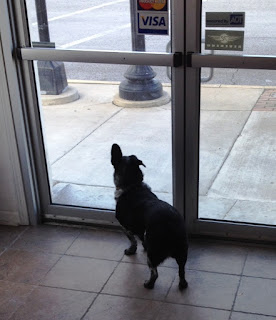 So this morning Sheryl has taken our new Jeep to get serviced for a minor issue. Angus is all out of sorts - he is not used to just me being here, and he's sitting by the front door with a confused look on his face, saying, "Where is my mooooommmmmm?"

And .... cue the sound of birds chirping.