SHERYL HAS A serious drinking problem. She constantly spills on one of her favorite shirts. This is a huge issue, especially when she's drinking coffee or hot chocolate from Electric Fountain Brewing.

Ryan, Tom and Grace at EFB make an awesome hot chocolate. They even make it half-sweet for Sheryl. There is a problem with lack of marshmallows, but I solved that today by buying a bag and bringing it to them. So now they have marshmallows, and make sure you ask for them specifically when ordering. 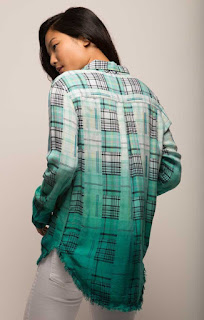 Sheryl's long-sleeved flannel shirt is a "graduated color" scheme. It's lighter on top and drops down to dark teal. She spills coffee or hot chocolate right in the middle, accenting the graduating colors. Every. Single. Time. She. Wears. It.

"I can't figure out why I always spill stuff on this shirt," she said. "I bought it with four other shirts. I never spill anything on them. Only on this one. If you can figure it out, you would be solving one of the mysteries of the universe. Please, let me know."

Perhaps the shirt has a secret magnetic force attracting liquid. For instance, I had an awesome Central Michigan University long-sleeve T shirt that I always spilled stuff on. In my case, it was usually lemonade. Ahem. It got pretty bad and I eventually threw it away, and I NEVER throw away T-shirts.

Sheryl really likes this shirt. She looks good in it. It's comfortable. At least it's never thirsty, since she always spills on it.

We'll go with the last explanation. I gotta go get more hot chocolate, with marshmallows. And maybe back to the house to get Sheryl a different shirt.
Posted by Rodney Hart at 10:27 AM