OUR NEW FENDER guitars and basses have arrived at Second String Music. They are gorgeous. We have an American Stratocaster and Mexican Telecaster on the wall right now, just begging to be played and to find a new forever home. 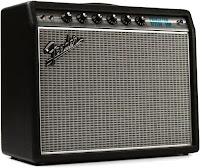 We got the Telecaster for a young man who saved his money and has dreamed of owning one. But he just called and said he's out of a job and it wouldn't be responsible for him to buy a new guitar right now.

That's okay. Here's how it works in retail - we try to get nice stuff in here and hope you buy it, but it's your choice and your decision. We can't force anything. The Telecaster will sell, and we'll get more. We understand jobs and family and responsibility. We are a small business that has had to balance our own finances and responsibilities. We truly do get it.

I just pulled the trigger on a new Princeton Reverb amplifier. It's tube amp heaven. Geesh ... I might even take it out for our HartLyss gig at State Street Bar this Sunday from 3 to 7 p.m. How's that for a cheap plug?

We have a Cheeseburger show a week from Friday in Hannibal (more on that in a later blog) and another March 24 for the Fabulous Fur Ball, so the Princeton will get a workout then, too.

Here's the deal - I've always wanted a nice Fender tube amp. We ordered the Princeton. I played it. I fell in love. I sold another tube amp to help pay for it and saved some gig money. Then I paid it off. Sheryl even does layaway for ME!

See how it works? It's not hard. If you've dreamed of owning a new Fender, come in and see us, and when you are ready, we'll make it happen.
Posted by Rodney Hart at 11:00 AM