Crash at Fifth and Maine

THERE WAS A horrific three-vehicle crash at Fifth and Maine last night. It's amazing nobody was seriously hurt as all three vehicles - a pickup truck, a small sedan and an SUV - were basically destroyed.

505 Studios owner Isaac Smith, his brother Joe and I were on the second floor of the Second String Music building about 9 p.m. when we heard two distinct BANG sounds. It sounded like gunshots. We scrambled down the stairs and came out to find people stumbling out of vehicles and debris everywhere. 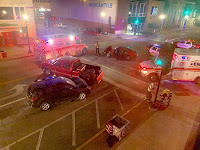 Without getting into too many details, it appears one of the vehicles ran the red  light, got T-boned by a vehicle coming up Maine Street, and bounced back into another vehicle waiting at the intersection. There were maybe eight or nine people total involved, and one person went to the hospital as a precaution. I'm sure there are some really sore folks today, but again, it's amazing nobody wasn't more seriously hurt or even killed.

The only other serious crash we remember from the seven-plus years we've been here was one winter night when a car got smashed and careened toward our building. There was a pile of ice and snow on the corner, and it literally kept the car from going into our building.

An hour or so after last night's crash there was a big storm, so this morning you can't even tell anything happened, save for a few pieces of broken glass.

We are just glad everybody is OK. Let's hope the person who was driving the vehicle at fault has insurance. It's a sobering reminder to be careful out there.
Posted by Rodney Hart at 10:44 AM