A LONG TIME ago my surrogate mother in Quincy, Anne Mays, gave me an old banjolele. It had intricate drawings and signatures on it. I believe she told me it came from her family but I don't remember much about it. We thought it was more of a toy than a real instrument, but it's super cool so we've had it on display in the store since we've opened.

The Mays family is awesome and they basically adopted Sheryl and me. We were close to Anne's husband, the legendary Bob Mays, and we are proud to be downtown and part of an area he was so invested in during his career as a real estate agent and businessman.

Today, John Frank, Anne's son, brought a matching banjolele into the store. It came from a family member in Oregon and has many of the same names on it. Basically both were signed in the 1920s at Camp Shawnee in Philadelphia, Penn. The owner names we can identify are Amy and Helen Sundermann, which happen to be Anne's mother and aunt. 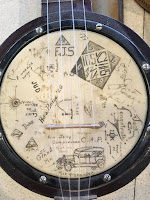 We doubt there is much monetary value in the two banjoleles, but the family significance is huge and we are honored Anne is letting us keep them in the store. Now that we know more about them we can show them off a little bit more.

It would be interesting to find the brand and if there are others floating around out there. We are content displaying the Mays family history at Second String Music, and we encourage you to come in and check them out! 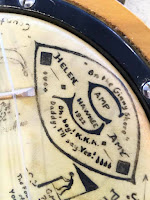 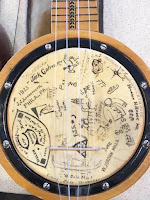