Jamming at The Club with Matt Roberts Blues Band

IT'S A SUNDAY night tradition in Quincy, hanging out with the Matt Roberts Blues Band at The Club Tavern on North 10th Street. Matt is  one of the few blues guitar guys around in the Quincy area and bandmates Shawn Buckner (drums), Mike Carter (bass) and Todd Boyer (guitar) tear it up every Sunday night. 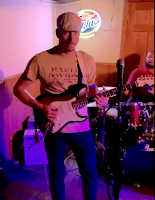 They are good Second String Music customers, too. Todd bought a Seymour-Duncan pickguard pickup system from us a while back and it transformed his ordinary Strat into a monstrous guitar. Matt has bought some really nice stuff from us recently, including an American Pro Series Fender Strat and a couple of tube amps. We appreciate the fact he keeps the local music store in mind when upgrading gear.

Every so often I venture down there on a Sunday night and jam with the guys. I'm completely average at guitar and it's like being between two giants trying to keep up, but it can't hurt to try and the boys in the band put up with my plucking. Some nights you'll have three or four guys get up there to play and it's always more fun than you should be allowed to have!

A few weeks ago Matt was under the weather and Todd was out of town so I directed the chaos and we had a blast. I'm not a blues guy per se but I think the boys in the band kind of like playing a little more rock and roll stuff. Pete Magliocco joined in on trombone and guitar and about half an hour into it the legendary Jack Inghram showed up with his sax. Hearing Pete and Jack crank it out on brass was pure joy and the Club regulars hooted and hollered with us all night.

I also appreciate Kevin "Koz" Weiss, The Club owner, who doesn't put up with any nonsense and is always glad to greet his regulars. Kevin loves the blues and live music and has done a lot for the local band scene.

Most of the time I'm in rock and roll recovery on Sunday night, but mustering up a little bit of energy is never a bad thing and we always have a blast at The Club. Hopefully we will see you down there on a Sunday night soon! Enjoy this short video of the band.