Dealing with that one bad customer

WE LOVE OUR loyal Second String Music customers. We are nothing without you. We think we do a pretty good job of being good to our customers, and our customers are good to us. It is a lot of give and take for sure.

In retail, big or small, it's the very few difficult customers that present the challenges. Yesterday one of them came in and it didn't end well. This person is now spreading lies and misinformation on social media, not that his three Facebook friends believe anything he says. We are always sure that people know there are two sides to every story.

This person dropped off a clarinet to be fixed a few weeks ago. We work with the Music Shoppe out of Normal for our band instrument rentals and repairs. I've never seen this guy until yesterday, and Sheryl can't remember ever seeing him. She was gone yesterday afternoon and I was in the store with a very nice family of four, showing them some guitars for their young son. In comes the guy and demands to get his clarinet, which he says was fixed.

He said it was the third time he's been in to get it. He said it didn't have a case because we made them take it out of the case before we sent it off (we never do that but we do make people take out all the extra stuff like reeds and mouthpieces). The alarm bells were going off and when I checked in back and didn't see it, he got agitated.

"This is the last time I ever come into this shit-hole music store," he huffed. I apologized, even though I had no idea where his instrument was or what he was so mad about. He walked to the door and I should have just let it go. But I told him his behavior was unacceptable in my store and what I thought of him.

His reply was "Bleep You." My reply was the same. He stood in the doorway, so I moved toward him and told him to get out, and yelled at him as he stormed up the sidewalk that he was no longer welcome in our store - not that I'd expect to ever see him again.

The sad thing is that the family in the store had to witness it. I apologized profusely for losing my cool. They said they understood and kept shopping and didn't seemed bothered by it. A minute later a mom and daughter came in and asked for help with a clarinet repair, and they were very happy with the customer service - and they got to meet Malcolm!

Geesh. A puppy solves everything. 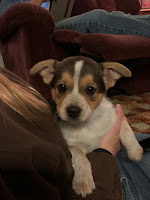 Ironically, the clarinet was being hand-delivered to this guy's daughter at school at the very time he was being a moron in our store. Not that he cared when Sheryl called him to let him know. Carry that anger, buddy. Wow.

Sheryl has 10-counted a few people out of the store ("I'm gonna count down from TEN and you better be gone when I hit ONE, or I'm calling the cops.") It's part of the deal of owning a business, I guess. We try our best to please or be understood but it can be difficult for some customers to believe that we aren't perfect people. I feel awful because I lowered myself to the guy's already low standards, and I wish I'd just shut up and let it go.

Oh well. Right now I have two sleeping dogs at my feet and I'm listening to 1/5 & Maine on YouTube, so things are better. And I'll try to do better the next time we have an upset and unreasonable person in the store.
Posted by SheyFey at 1:12 PM