I'VE DONE JUST about everything in the media, but I've never played live music on a morning show.

That will change Thursday morning, when KHQA in Quincy hosts The Cheeseburgers on their patio behind the 36th Street station. We'll be doing a short interview at 5:45 a.m., followed by acoustic performances at 6:15 and 6:45.

Been a while since I've been up that early. GUH. 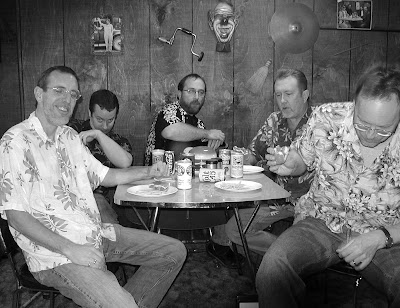 Anyway, we are practicing with our acoustic guitars tonight and it should be a lot of fun. This will be a different sound and style for us but we look forward to the challenge.

We are also officially introducing new guitar player Tim Lawless as a Cheeseburger. He played with us last weekend and we had a blast. He's a great player but more importantly a great person, and we'll have a lot of fun working up some new songs and getting him acclimated to the band.

Eric McKay has decided to leave after a year and a half. Eric is a tremendous guitar player and singer, and he brought great ideas and songs to The Cheeseburgers. We will miss him a lot, but he's decided to step back since he has three young kids, a demanding job and several other music related commitments.

Eric's last show will be Friday night at One Restaurant. We are celebrating Burt's birthday and it should be a great time, showtime is 8:30.