How I Fix Leaky Faucets

THE DOWNSTAIRS BATHROOM tub faucet is leaking. When I told Sheryl this, she shrugged and said, "You fix it."

So she went to the hardware store, conjured up parts, took the dang thing apart. My job was to go in the basement and turn off the water. It only took two trips, because the first time all I heard was "water heater" and "pipe" when told what to do. The second time was better after Sheryl drew a map and spoke veerrrrryyyy slooowwwllly about where to find the shut-off. 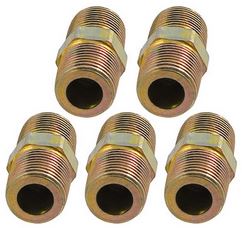 Apparently the faucet and plumbing was jerry-collins-rigged because Sheryl got very angry and cursed loudly, behavior normally reserved for bad movies, Battlestar Gallactica episodes and churchy people. Sheryl then did the dishes by hand to wash her frustration down the drain, but only after I went back downstairs and turned on the water. In one trip! I was very proud.

Turns out the pipe was the wrong size and the thingy that attached to the doohickey was not the same size as the nipple bushing. And I'm not making up the nipple bushing part. She even walked over to the plumbing place at Third and Maine with the hapless Frank Haxel to get the right parts.

And so the moral of the story is, never try to do home repair. Leave it to the pros or your wife. Or Frank.

And don't make jokes about nipples and bushes. It's waaaaayyyy too easy.