NICE JOB BY local media remembering the 20-year anniversary of the West Quincy levee brake. I was on WGEM News Talk Live Monday morning talking to Rich Cain about the awful day, July 16, 1993, and all these years later you can still hear the emotion and darkness in his voice when he remembers.

The Herald-Whig had a fantastic package Sunday, led by Ed Husar's story about Norman Haerr and the fight to save the levee. Ed is The Whig's best reporter and we are all tied for last compared to him. 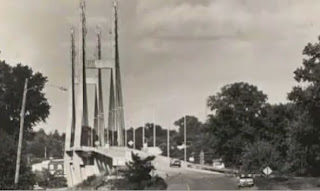 Here is a report from this morning's WGEM show. It features the infamous clip of the James Scott interview right after the levee broke. Some say without this interview, Scott never would have been convicted of breaking the levee. It's a bit creepy knowing what we know now when you see the WGEM reporter's reaction to his explanation.

If you lived in Quincy, you knew where you were when the levee broke. Hard to believe it's been 20 years.