Did the dog eat your cigar? DUH.

I DON'T SMOKE. Never have, and hopefully never will. I do like, every now and then, a nice cigar. The cheaper the better, bless my Dutch Calvinistic self.

Yesterday afternoon I decided to smoke a cigar in the backyard. I got about halfway through and decided to save the other half for the evening fire. As I got ready to stack the wood and make the fire a few hours later, I put the cigar somewhere, and I never did find it. I'm convinced I put it in one of those places that seemed safe and logical at the time, but of course that doesn't work after you've played back to back gigs and you are so tired you can't see straight.

Sheryl eventually figured it out, of course, after watching one of our dogs slink around the backyard with a familiar pinned-ear look on her face.

She is convinced Bella, our dumb lab mix who eats everything from dead rodents to Christmas trees to tin foil, snatched up the tobacco product and inhaled it (arf). "Well, that will be interesting to see what it looks like tomorrow," Sheryl said. 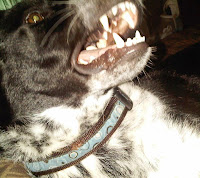 It wouldn't surprise me if Bella grabbed the cigar and went behind the shed with Tucker to smoke it. "He'll never know," Bella probably said.

"It's not easy, owning these dumb humans," Tucker said. "Hey, can I have a puff?"

Note to self: Put the cigar in a safe place, like, on top of the roof. The dogs will never figure out how to climb the ladder.