Tucker and fireworks. Not a good combination.

TUCKER, OUR BORDER Collie rescue dog, runs like the wind. Before we got him, he used to get loose from his home in Mendon and zip all over town. He's escaped the fence a few times but always comes back, and he's getting better about being sociable around people and not so skittish.

Last night I was walking him in our favorite out of the way spot when he heard fireworks, and he bolted like a bat out of you know where, and he was gone. We searched for an hour, 90 minutes, no luck. He could have gone anywhere, and I had suspicions he'd headed north away from the fireworks and houses.

Sheryl's sister, Stephanie, joined the search. Sheryl got on the scooter and talked to all the neighbors in the area. She even flagged down QPD officer Bill Calkins, a Second String Music legend, and he promised to keep an eye out with his partner, officer Powell.

Sheryl also posted on the local missing animals Facebook site, and the awesome Janet Cavanaugh offered to break away from July 4 festivities to help look.

Just as dusk was settling, Sheryl got a call from our friend Chris Kelly, who said a friend of his had spotted Tucker at Fourth and Jersey. That's a good mile north of where he was last seen.

Sheryl finally found the terrified dog near Third and Maine. Tucker actually heard the scooter first and came running. Then he tried to bolt again when he heard more fireworks, but he wasn't getting away from Sheryl's death grip. She got a nasty skinned elbow out of the deal, and an exhausted Tucker was coming home. 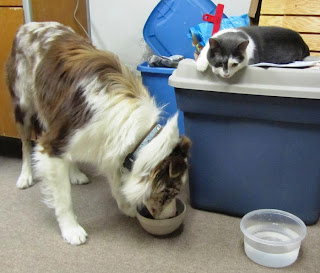 Bella, our Lab mix, couldn't care less about fireworks. She doesn't listen to us either, unless there is a treat involved.  (She has perfect hearing)  But Tucker and adopted sister Lucy, a Border/Aussie mix, hate them. They lose all their other smarts and sensibilities when they hear loud bangs and bombs.

Their long runs will be curtailed for the next few days until the locals get done playing bang bang. I have a theory about people who set off loud explosives in neighborhoods, especially late at night, but it involves having small private parts and other not very nice things, so we'll just leave it at that.

Thank you to everybody who helped look. You can come say hello to Tucker this morning at the store. I'm sure he'll tell you it was a grand adventure and smile real big.

And I'm sure he'll tell you he's looking forward to no more fireworks.