Lew's rock star pics - who are these guys? 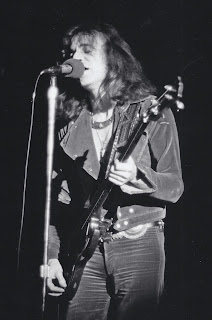 LOIS PORTNOY DROPPED off some really cool black and white photos her husband took of rock stars playing in St. Louis. Lew Portnoy, who passed away last year and was a Second String Music legend, shot hundreds of concerts in St. Louis, many at the old Arena.

Steve Rees identified a few of them. One shows Neil Young with a steel guitar player we think might be Herb Pederson. We are fairly certain Jeff Beck is pictured with a bass player. Another shows a very young Norman Blake, a huge name in guitar circles.

But two other photos have us stumped. One is of a bass player and singer who looks a lot like Alice Cooper. Did Alice Cooper actually play bass?

The other shows a cherub young man who looks, well, British or something. He is sitting with a guitar and sticking his tongue out. Sheryl thought it might be Davey Jones or Gene Wilder, and Steve thinks it might be Harry Nilsson. 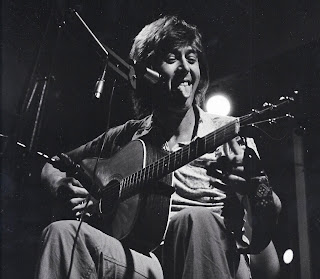 These photos were taken under horrendous lighting conditions. Lew had to use aperture and F-stops on his camera to capture images that weren't blurry or out of focus. Then he had to print them, and his bleeding techniques were incredible.

The photos are works of art, and we are humbled Lois thought of us when finding them. Anyone want to shoot us a guess at who these two gentlemen might be? We would love to know your guesses too!