FOR THE FIRST time in years, I didn't have a gig on New Year's Eve. Sheryl and I thought about going out to a party and a few bars. But at 9 p.m. I looked at her and said, "You don't mind if we stay at home, do you?"

"Sounds good to me," she said. 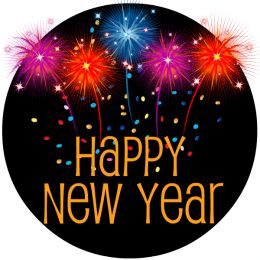 She challenged me to stay up until the ball dropped. I made it to 11 p.m. and watched the ball in Times Square bring in the new year, Eastern Standard time. The music was awful and one of the bimbos trying to scream kinda botched it up, not that I was really paying attention.

Then I went to bed. At midnight I awoke to the sounds of fireworks and Tucker frantically bouncing around the house, and I thought, "What kinds of idiots shoot off fireworks at midnight?" Then I thought, "You live in the Hood, Holmes. It's all good."

So that was my New Year's Eve. You know what? It was fine, and I didn't wake up run over by the rock and roll truck.