What's in a band name?

THE OLD ROCK House in St. Louis periodically has Facebook contests for best band names. Most of them are hilarious, some off-color, some bizarre. Personally, Dump Truck Santa is about the best band name I've ever heard, along with Bi-Polar Bears.

There's usually a story behind a name. My first band, The Funions, started at First Union Congregational Church. First and Union make Funion. We were kind of greasy and generally full of chemical preservatives, so the name fit. 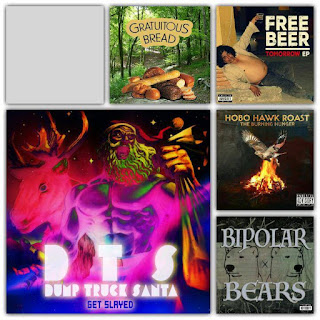 Most of The Funions later started a band called Reasonable Doubt, which had two lawyers and a police officer. The Cheeseburgers were named because the band plays cheesy classic rock and songs people want to hear. Cori Lyssy and I are called HartLyss, thought up one night by Frank Haxel. I wanted to call us Cheap and Easy and have people figure out who was what, but I got voted down.

Then there is Pepper Spray, the Second String Music jam band. Pepper Spray was named after a certain law enforcement officer was asked the preferred method to subdue unruly suspects.. "Pepper spray. Less paperwork," he said. In an instant, a classic band name was born. And if Pepper Spray ends its long and storied run, I claim dibs to Less Paperwork.

Our good friends Ted Holt and Pete Magliocco have formed a duo. They have all kinds of suggested names, very few suitable for print. My favorite is Ball Smear, thought up when I threw Angus The Young's soggy tennis ball against a wall and it left a mark. That's the story I'm sticking with, for now.

This Saturday a new local band called Funhouse Riot plays at One Restaurant, and hopefully we will check them out. The name alone suggests a good time.

I've come up with a billion classic band names but I never write them down. I gotta start keeping track and submitting them, or form a new band and use a double entendre just to make people think.

So go to the Old Rock House page and turn in your favorite band name, and win a million dollars. Wait. There are no cash prizes. No Cash Prizes. Sweet! Another great band name!

See how easy it is?