One goes events only 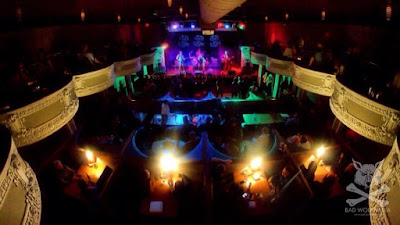 ONE RESTAURANT AND Bar has decided to go events-only. This is a blow to the local music scene because One was, and is, a great place to play. With the demise of Turner Hall last year, there are fewer and fewer local band venues, a reason the local band scene in general is slowing down.

The Cheeseburgers have done many shows at One. Some were amazing and some weren't. But it was never because of the venue. It's an old movie theater (I remember seeing "Independence Day" there in 1996 when I first moved to Quincy) and it has a lot of charm. It isn't the easiest place to load in for a band, but it has a really nice stage and the acoustics are decent.

Here's the announcement from One ...


EXCITING ANNOUNCEMENT!
ONE is now available for Special Events only; to include: Receptions, Rehearsal Dinners, Banquets, Class Reunions, Business Meetings, Movie Theater Rentals, Birthday & Anniversary Parties.......
As of today, ONE will no longer be open for regular restaurant service.
We will still be booking your favorite bands!
Please check our website for our calendar of events.
www.onerestaurantandbar.com
For bookings, please contact Tenille (217) 257-0422

One was among the few places left around here to book and pay bands. It's easier for venues to hire the solo acoustic acts. Cori Lyssy and I (HartLyss) have played a few shows at One and always love it, and let's face it - the owners don't have to pay HartLyss as much as a band. Yet an acoustic duo is not going to be the same as the full-blown band experience.

For the most part, One will no longer book and pay bands. It will be up to the event organizer. Sheryl and I encourage our local musicians to get paid for their services and we hope One is still used regularly for shows.

Noi and Tenille, the owners, are huge supporters of local music. I applaud them for their efforts and for giving us the opportunities to play in a beautiful venue. They were trying to sell the business and had a buyer, but it fell through last week - hence the events-only idea. Noi and Tenille have another full-time business and it simply became too time-consuming for them. We understand.

One is still going to do Open Mic Night, which gives less experienced musicians a chance to play on a stage. It will now take place on the first Thursday of every month, not a bad idea. I still remember the Avenue Beat girls and their first performances at Open Mic Night, and I will still take some of my guitar students so they get an idea of what it's like to publicly perform, yet without the pressure of a paid gig.

Thank you, Noi and Tenille, for supporting us. Best of luck with the events-only idea, and we will see you again.