Ghosts at Eighth and Klondike

I USED TO LIVE in Southern View and drive up and down Klondike Road at least four times a day to get to work. Klondike is the main east-west artery between Eighth and 12th streets.

For many years, there was a house on the southeast corner of Eighth and Klondike. There was an old couple living in the house. If the weather was decent, they were out in their huge garden. They were always puttering around and doing stuff. The house was small and well kept. It looked like the man and women were content in living out the years in their home. Who knows how long they lived there.

Then the man passed away. I don't remember his name but I remember reading the obituary. The woman stayed in the house and was always outside, but the garden didn't get tended to quite as much.

I moved from Southern View in 2005, and I no longer drove past the house on a regular basis. Every now and then I'd go by and it still looked in decent shape, but the woman was never outside.

It's likely the woman moved or passed away. The house was probably vacant for a while. Did it need to be torn down? Was it passed down in the family and simple unwanted? There's a house like that across the street from us in Calftown and it's heartbreaking to see it now, slumped and lonely in disrepair. 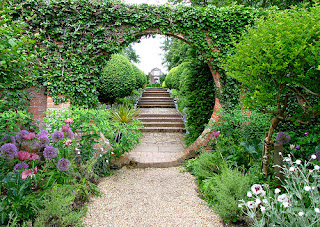 The other day I drove up Eighth Street, and to my surprise the house was gone. There was a truck on the street and some workers walking around the property. Geesh. When did it get torn down? I have no idea, and I guess it doesn't matter.

The garden is long gone, too.

I don't believe in ghosts, but I do believe the spirit of the man and woman still haunts Eighth and Klondike, and in a good way. They are out in the garden and enjoying the warm weather after a long winter, content to pick weeds and plant vegetables, and trying to keep the varmits out.

Progress, right? An old house gets torn down, and who knows what will go up there, if anything.
Posted by Rodney Hart at 10:38 AM