Sixth Street moves on up

WE ARE PROUD to be a downtown anchor at Second String Music. With the addition of Electric Fountain Brewing at 503 Maine, which will open next week, we think Fifth and Maine is the place to be.

But there's a lot more to downtown Quincy, and we are really excited about Ally's Boutique and Sweet Apricot Shop moving to North Sixth Street from the Maine Center.

Both shops have been next to each other in the Maine Center for a while. From all accounts both stores have done well, but now they are moving to the 100 block of North Sixth, on the east side, and they'll still be next to each other. And now they'll have store fronts on the street so it's easier to shop at both places.

There are already great businesses on North Sixth, like Domestics and the Silhouette Shop. Add Grown & Gathered on the other side of the street, and it's getting more and more hub-like. Grown & Gathered is also putting in a Tap Room to go with the very cool Tree House space in the back. 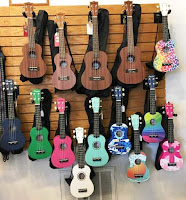 Sara from Sweet Apricot and Ally from Ally's Boutique both rock. The grand opening for both store is in about a month. Here's to thriving local businesses staying downtown and cheers to both!

While you are downtown shopping around, check out our new ukuleles. We have added Amahi for a less expensive ukulele option, and our Luna and Gretsch ukes continue to sell well.