TEN THINGS I will do instead of watching some stupid show hosted by an overwrought woman who thinks it matters.

1. Play fetch with the cat, Fast Eddie, and play catch the predator with the dog, Bella the Destroyer. She chases my hand when it is under a blanket, stoopid dog. Yes, they think they are a dog and a cat respectively. Now THAT is an Oprah episode. 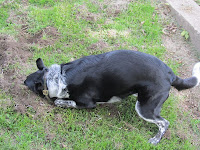 2. Wonder how I'm getting a heavy desk and other stuff from the second floor to the first floor at Second String Music. Hello Frank Haxel. How are you?

3. Turn down Oprah's request to appear on her show because I'm going back to work for The Whig. Sort of. Press release coming tomorrow.

6. Try to figure out a date to unleash "Pepper Spray," the newest musical project to emerge from Fifth and Maine.

7. Do the dishes. HAHAHAHAHA. That was in all caps, by the way.  Sheryl is rolling around, clutching her sides laughing at the thought of me getting my hands soapy wet.

8. Write a thank you note to my father in law, Jerry Collins, who installed an antenna for us to watch the local stations. WGEM still doesn't come in quite right. I will be quiet now.

9. Take steroids so I can finish doing the dishes. Then go on Oprah and admit it.