TOOK MONDAY OFF to recover from a small bout with hackaflemdeath. Better now, thank you.

- Nice game, Notre Dumb. Nothing funnier than listening to ND fans complain about bad calls after their team gets absolutely drilled by a superior team. Still, a good season for the golden domers, and hopefully Coach Kelly stays and they build on success.

- Huge meth bust yesterday in Q-Town, click here. Observant neighbors played a big part in this one. Sometimes it doesn't happen overnight, but ultimately the bad guys get caught.

- Speaking of getting caught, the guy accused of murdering a Quincy man last week had a court hearing Monday and repeatedly said he didn't understand what was going on. Shocking! At least he was appointed a good lawyer.

- We are in the icky days of January, where repeated thawing and freezing makes a mess of sidewalks. The dogs flail away on our neighborhood walks and I've taken a header or two. At least the sidewalks around Second String Music are relatively clear.

- Getting back into the book-writing mode. Two projects in the works, one based on what happened in the old store, and another about something rather .... topical. Stay tuned.

- Had a young man in guitar lessons yesterday ask to learn Boston's "Peace of Mind." There is hope for the next generation, after all. 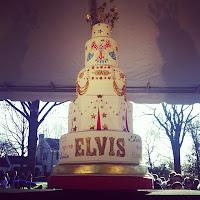 - Next up for SSM is our big two-year anniversary. Blowout preparations will start soon. Is the fridge full? Good!

- And finally, happy birthday to my wife's favorite man, well, besides Logan Kammerer .... Elvis!  Huge Birthday for the woman that will marry us anytime, KB Conte.  Enjoy the cake!