Trying Not To Cry In Class

AS ALWAYS, I had a great time hanging out with Mike Terry's classes today at John Wood Community College. I learn just as much as the students when talking about interviewing and how to go about the process. It was also great to see JWCC legends Dr. John Letts and Tracy Orne, who actually runs the place.

Anyway, during the second class I blabbed about who I was, then asked each student to tell me their name and where they were from. One gal near the front said, "Darion Stephens, Quincy." And I almost started crying on the spot.

My daughter, Emily, was a basketball player for Quincy High and played on two bad teams her junior and senior years. Her final game was in February 2009, at the regional tournament in Moline. Quincy had no chance, Emily knew it, and she knew it was the end of four up and down years playing basketball. And it was her last organized and official game of hoops. 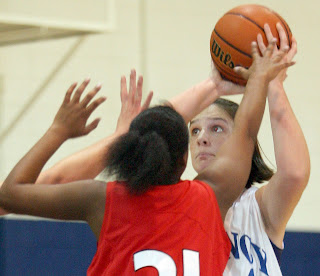 From what I remember, the Blue Devils put up a pretty good fight, but Moline didn't even try that hard to win. Emily came off the court in the last seconds of the game, and a few teammates gave her some half-hearted hand-slaps.

But one girl at the end of the bench leaped up and ran to Emily, and gave her a big hug. That little girl was freshman Darion Stevens, and I won't ever forget that scene.

I recounted the story to the class, and Darion's face lit up when she realized I was the big goofy father of Emily. Good grief - that little freshman on the end of the bench is now a freshman in college!

Amazing, how a memory can invoke such strong emotion.

We carried on and I managed not to cry. The class members probably would have had to interview me if I'd bawled, but I sucked it up and continued to scare the students away from considering careers in journalism.

Thank you, Darion! Four years later, you still hold a special place in my memory.