THE CHEESEBURGERS JUST finished a good summer run of shows. We played last Saturday night at One Restaurant & Bar, and we had a decent crowd. Quite a few stayed all night and had a great time, and I thought we played pretty well.

I like it when people request songs. The Cheeseburgers play a variety of classic rock, country and blues tunes. We've been known to try a song we've never played, depending on the venue and atmosphere. We have no shame. We play Cheesey music, and that's the whole point. 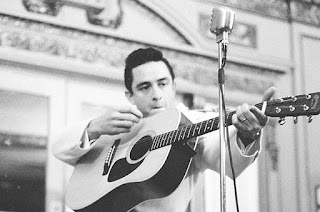 About halfway through our third set Saturday night, a guy in the balcony started yelling at the top of his lungs as we prepared to launch into a song. "Play some Johnny Cash!" he yelled. "Jaw. Nee. CASH."

Apparently this guy wasn't around during the first set, when we played an entire medley of Johnny Cash songs. I think he was sitting with a woman, who didn't look impressed. He kept yelling. Finally, he threw up his hands and wheeled around to his table. Then apparently he left the building.

I think there are certain expectations when you go see a band. You want to hear songs you like. The band is there to entertain you. That's how it works.

I think 99 percent of the people who come see us know what we are about. They know we bust our butts and try to please everybody who comes. I'm sorry the guy who wanted more Johnny Cash wasn't happy. It wasn't for our lack of trying.

I'm just gonna Walk The Line and forget about it. And maybe learn a few more Johnny Cash songs.
Posted by Rodney Hart at 10:42 AM