Bridges and islands and riverfronts

APPARENTLY IT'S GOING to cost the Quincy Park District $5 million to build a new bridge to Quinsippi Island. Whaaaaaaat? 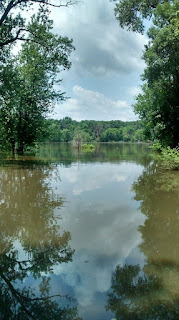 I love Quincy and the sense of history around here, but the bridge to the island reeks of ignoring present needs. I am not blaming anybody or the Park District for waiting so long. It's just kind of the way things work around here.

I'm not too worried about the island's log cabins and shelters. A bigger issue is the marina on the island, which is less than full. If the bridge is closed, how will people get to their boats? By boat? Maybe our buddies Steve Rees and James McKinney, who have places just up the river, can open a ferry service.

Would it be possible to relocate the marina to this side of the river? You know, where a few businesses might be able to open up, too. You know, like, riverfront development. Quincy has never completely figured out the whole river thing. Big business has, which is why driving into town on Ill. 57 can be a little depressing.

Ironically, the Quincy Park District relocated its offices to the riverfront not long ago. Is there room for a dock or two over there? I'm ignorant about such things, I guess.