Why didn't I know about Steve Goodman?

I'VE HEARD HIS songs all my life. But I never knew anything about him.

How is that possible?

A while back, a guitar student suggested I learn the song "City of New Orleans." Not the Arlo Guthrie or Willie Nelson version, he said. The original version. The best version. 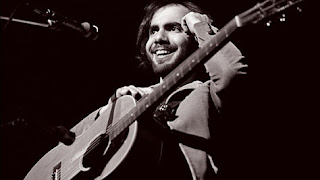 Steve Goodman was a Chicago guy. He wrote amazing songs. He was an amazing acoustic guitar player. I like to think I know a little something about music. How did I not know about this guy, being from Illinois and all?

Another student said, "When I went to Western Illinois University in the late 1970s, all my Chicago buddies came down with four or five albums, and two or three of them were by Steve Goodman."

Goodman is most known for writing "You Never Even Call Me By My Name." Another guy made it famous. Goodman's version is way better. Look it up on YouTube.

He was anti-establishment and a huge Cub fan. He died of cancer in 1984. I can only imagine how much more great music he would have made.

So. I'm way late on the Steve Goodman train. I'm hopping on and trying to make up for lost time.

I leave with a concert video from the 1970s. Just watch the first song. It's two minutes long. He ambles onto the stage and there's tepid applause from the audience. They have no idea who he is. He tears through the first tune and the reaction is electric.