WE OPENED THE store at 11 a.m. today, an hour later than usual. Sheryl had a doctor's appointment and I was playing at the Illinois Veterans Home. It was the first time in the nearly five years we've opened late. 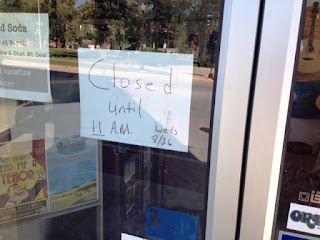 Sheryl and I are an island, always here and rockin'. Every now and then Steve Rees comes in to help us out if we head out of town, and it's greatly appreciated. We open early and stay late all the time. It's a small and family-owned business. We think it's part of why we are doing so well.

If I go to a business and there's a sign on the door that says they'll be open in an hour, I probably wouldn't be happy. But I'd understand, especially if I know the owners.

Of course, as soon as I opened the doors people started piling in and I sold a really nice guitar right off the bat. Then Emily showed up with her college roommate, and then Rockin' Jake and his crew pulled up - they have another gig at The Club tonight and they are staying at Chez Second String.

Maybe we oughta open an hour later every day. Nah. We enjoy our lives and the store hours of 10 a.m. to 6 p.m., Monday through Saturday.  Thanks for your understanding and support!
Posted by Rodney Hart at 12:31 PM