THE MOTHER AND father were losing their kids. So they decided to institute a "screen-free time" every day, between 4 p.m. and 8 p.m.

During those hours, nobody in the house is allowed to access a screen - television, computer, phone. The two kids were spending too much time with their noses buried in front of images and video games. 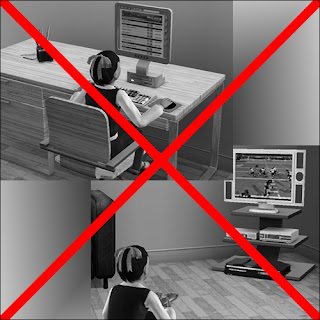 It didn't go well, at first. The dad came home from work at 5:30 on the second day, and asked where his 13-year-old son was. "He's in bed," announced the mother. In bed? Now? "He threw a fit when he couldn't play his video game. So he went to bed," the mother said, with a shrug.

The kids started talking, first to each other, then to mom and dad. The moods started to brighten. Stuff started getting done.

The father was collapsed on the couch last Saturday. It was five minutes after 4. He was watching a golf tournament, enjoying alone time. His 8 year old daughter walked into the room and said, "Uh, dad? Screen time is off. That goes for you too, you know."

The father had two choices. He could either ignore his daughter, or play by the rules. So he turned off the television. He went outside with his daughter. They started playing a game. Suddenly it was 6 p.m. and time to eat.

That night, the father noticed that the kitchen was a disaster. Both parents work and try their best to keep a clean house, but with two kids and schedules, well ... it's tough.

So the father had an idea. He motioned to his son and they stepped into the kitchen. "If you clean the counters, do the dishes and put some stuff away, I will give you some screen time," the father said.

So the kitchen got cleaned and the son got 15 hard-earned minutes on the computer. Then he turned off this video game and read a book. In fact, all four family members sat in the living room and read. It was quiet. And the father realized something.

Imagine that.
Posted by Rodney Hart at 10:29 AM