FOR THE PAST few months, it's just been me and the boys. I'm not gonna lie - Tucker, Angus and I liked it that way.

Our walks were easier, we don't go through as much treats and food, and Angus and Tucker like to play together. They enjoy chasing Fast Eddie in the store, and generally keeping Sheryl and me in line.

Sheryl kept looking at Aussie and Border Collie rescue websites. Most of them were actually in Australia, so there was little chance of her finding something to bring home. On Friday morning, she found out about a stray Aussie mix in Hannibal. Michael Bayles, top dog at +BoodaLu Steakhouse,  had already paid all the adoption fees and made sure she was fixed, had her shots and was generally OK.

So on Friday afternoon, we had the newest member of the family in tow. 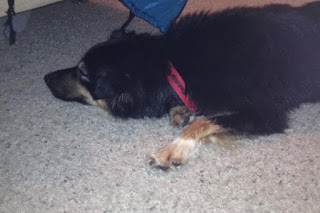 Meet Genie, Eugenia Rebecca Hart, and welcome her to the Hart Pack. She is shy and has a soft bark. A look at her beautiful face and a lick of her tongue tells you she's been through some sthuff. She is at least 2 years old, and wasn't fixed when found. Sheryl believes she was an outside dog - she wouldn't get in the car and had to be coaxed up the three steps into our house. She may have been used for breeding or just left to her own devices.

The other dogs were a little perplexed at first but have quickly warmed. Genie needs a little more guidance and she needs to learn not to snatch food off a plate, but that stuff just takes time. She is skittish when too much is going on and, like Tucker, will take time to socialize and adapt. We are patient.

She's already trained to stay with the boys on our daily walks. She is beginning to chase after Angus' toys. She sleeps on a pile of blankets and doesn't make a peep through the night. We'll bring her to the store every now and then but not too much at first.

In other words, she's right at home. And we couldn't be happier.
Posted by Rodney Hart at 11:45 AM